It’s one of the strange paradoxes of history that the most common things are often the things we know least about. After all, the more familiar something was to people in history, the less they wrote about it! Medieval dances are one of those things that have become largely obscure to us.

We know that dancing played an important role in life in the Middle Ages. People danced at balls and tournaments, but also at village fairs and holidays. But what exactly their dances looked like? Unfortunately, nobody wrote down a list of handy dancing instructions, so it’s all rather vague at best.

That doesn’t mean we know nothing, though. We do have some sources, such as paintings and indirect remarks about dancing and dancers. Because dancing plays a rather important role in The Spinster & The Thief, I spent some hours reading about the subject these weeks. After all, even fantasy should at least be believable. I’ll happily summarize my findings for you!

Probably the most popular Medieval dance was the carole. (It was so popular that a historian, Robert Mullally, wrote an entire book about this single dance form – that should tell you something.)

The carole was a very simple dance, which is probably the reason nobody wrote down much about it. The dancers stood in a circle around a tree or sometimes around a singer, with men and women alternating, and moved clockwise on the rhythm of the music. Often they would be singing while they were dancing. For example, the person standing in the middle would sing the verses, and then all dancers would join for the chorus.

How do we know this much about the carole? Ironically, our best sources are the people who hated the dance. For example, Jacques de Vitry was a 13th century theologian who wrote that the carole “is a circle whose centre is the Devil, and in it all turn to the left, because all are heading towards everlasting death. When foot is pressed to foot or the hand of the woman is touched by the hand of a man, there the fire of the Devil is kindled.”

Well, well. It may be clear that Jacques didn’t like dancing too much.

Some other medieval dances

There are some other medieval dances about which we know even less. A couple examples:

Not all Medieval dances were group dances. We also find some mentions of couples dancing together. For example, an 11th century romance written in German Latin describes the dance of a young knight and his wife at their wedding:

The young man arose and the young lady too. He turns in the manner of a falcon and she like a swallow. But when they came together, they passed one another again quickly, he seemed to glide along, she to float.

Pretty cute, isn’t it? And in the 13th century poem Parzival we find:

Many a fair lady danced there in his presence. The knights mingled freely with the host of ladies, pairing off now with one, now with another, and the dance was a lovely sight. Together they advanced to the attack on sorrow. Often a handsome knight was seen dancing with two ladies, one on either hand.

Couple dances seem to have taken place only (or at least mostly) in noble environments. This is also the dancing style I eventually for the royal balls in The Spinster & The Thief  (which, by the way, you can read for free!) After all, dancing together offers a lot more opportunities for blossoming romance than jumping around in a circle with half of the court…

Apart from the Medieval dances themselves, I also read a little about the music accompanying them. In some cases, there would be no music at all: with the carole, it appears the singers provided all the musical accompaniment. But in other cases we find mentions of musicians at dancing parties.

In many cases, rhythmical instruments would be used. Think of drums or tambourines, or simply jingles and bells. In other cases, fiddles and flutes also provided an additional melody. And even horns may have shown up in the dancing halls!

Medieval dances: from couples to caroles 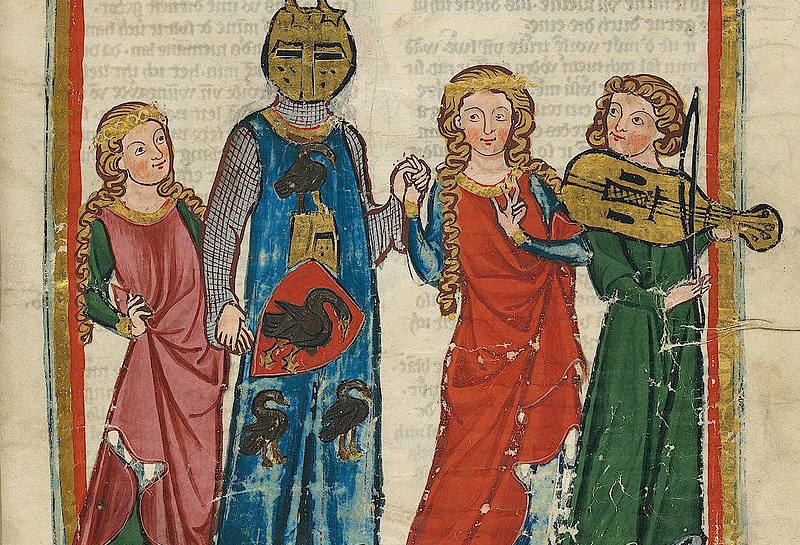 No Comments on Medieval dances: from couples to carolesFun facts LisetteApril 10, 2021April 16, 2021